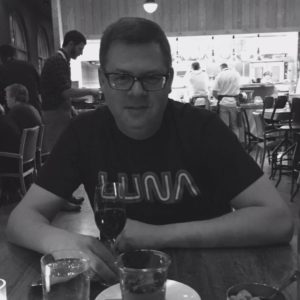 John Conley is a full time designer at Raley’s, has a thriving freelance business AND is the lead singer and rhythm guitarist for Desario, a Sacramento Indie band. He just recently became a full time designer at Raley’s, but has always love to draw and paint. He began studying the arts at American River College after high school, but his passion for music won him over and he postponed his studies to join a band. His current band Desario just released the EP Red Returns. Click here to watch a video of their recent live show at Ace Of Spades. Being part of the music scene allowed him to stretch his art muscles from time to time – designing band posters for his and friends’ bands.

About eight years ago a friend of John’s convinced him to take an Adobe Illustrator class at Sacramento City College. He enjoyed it so much he continued taking design classes and eventually decided to go back to school and focus on graphic design. He continued to design for bands while in school, and his work was noticed by Clay Nutting, one of the founder of TBD Fest and owner of LowBrau. Clay hired John to produce posters for several of his events.

The coolest thing he has ever worked on? The official box set poster for his favorite band Luna. He designed the poster for a show they performed locally here in Sacramento – and they liked it so much, they contacted him directly to design the box set version. He’s still flying high off of that one!

I asked John to share some of his favorite designers with us and they include poster designers Duane Dalton and Jason Munn and the studio DKNG. For the next CMND SHFT he suggests incorporating more music, food and beer (I like the way he thinks!) and he would like to see a larger presence from both large and small design agencies as part of the event.

BESIDES Bacon Fest, Raley’s and all his freelance work, John is working with Test Pattern Records, a local record label (Desario is one of their bands). He created the label’s branding and has created about 90% of the packaging thus far.